Arbitration Is For Business Heavyweights, Too 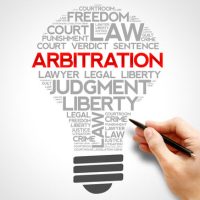 Just as some couples use mediation for their divorce proceeding instead of going to trial, some business disputes go through arbitration out of court rather than being litigated in front of a judge. Arbitration can be less contentious than a court battle, but there is also less transparency; while an open trial better ensures the judge is being fair, arbitration agreements are often confidential.

For most employees, when your employer offers you an employment contract that stipulates that you must resolve all disputes arising from the contract through arbitration instead of having a judge decide the case, you should run — not walk — to the nearest employment law firm. On the other hand, if both parties to the dispute are business bigwigs who do not want their dirty laundry becoming a matter of public record, they might both prefer to settle their disagreements privately through arbitration. If someone is threatening to sue your company, and you are wondering whether arbitration is an option, contact a Los Angeles business dispute lawyer.

In 2017, Scott “Scooter” Braun was on top of the world. He could take credit for launching the careers of some of music’s biggest stars, such as Justin Bieber, and he was married to an heiress to a billion-dollar fortune. There was nothing to do but go bigger, it seemed. Braun decided to create a private equity fund called Scope Capital Management, and he recruited Peter Comisar (then the vice chairperson of Guggenheim Securities), to join him in the venture.

According to Comisar, Braun persuaded Comisar to leave his lucrative job not only by promising him a generous salary, but also by promising that Braun could attract investments from some of the wealthiest men in the entertainment industry (including, according to Comisar, the likes of David Geffen, Jimmy Iovine, and Haim Saban). Comisar believed in Braun’s plan so thoroughly that not only did he leave Guggenheim Securities to join Scope, but he also convinced several of his colleagues to come with him.

A year later, Braun’s promises had not come to fruition, and relations between Braun and Comisar soured. Braun first stopped paying Comisar’s salary and then diverted his own investments away from Scope and toward other projects. Comisar sued Braun in the summer of 2021, alleging fraud and breach of contract. Braun alleged that it was Comisar who did not meet his contractual obligations; he claimed that Comisar was contractually obligated to secure $250 million in funding by the end of one year, but he failed to do this. In September 2021, the parties agreed to resolve their dispute through arbitration.